Here is a summary of this blog post featured on Info Wars Nightly News: Sodium Benzoate

I have a challenge for all of you today! That challenge is to rid your pantry and refrigerator of Sodium Benzoate. This chemical preservative is used to help inhibit the growth of bacteria and fungus in acidic products. It’s the cheapest mold inhibiter on the market, which is why it is so often used. Acidic foods tend to grow bacteria, mold and yeast more easily than non-acidic foods, so the Sodium Benzoate extends the shelf life. It is widely used in foods, beverages, cosmetics, dental care products, and pharmaceuticals. I even found it in Hyland’s Homeopathic Cough syrup. It is also found in a lot of food in restaurants. For example, Subway’s jalapeños, pickles, banana peppers and teriyaki glaze use Sodium Benzoate as a preservative. 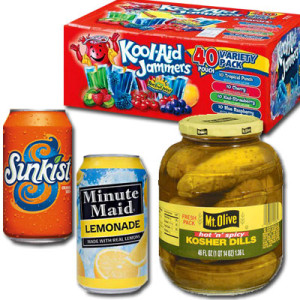 Sodium benzoate is considerably more toxic than either processed sugar or high fructose corn syrup. It may exacerbate asthma, hyperactive behavior (when consumed in products with certain food colorings), and cause skin rash upon contact. A study in 2007 indicated that it may cause serious cell damage associated with cirrhosis of the liver, aging, and Parkinson’s disease. In animal studies, there are reports of possible weight gain, liver and kidney issues, and birth defects. (Source)

This ingredient has been linked with creating free radicals in the body, destorying mitochondrial DNA, and thus adding to the body’s aging process. Readily absorbed by the skin, Sodium Benzoate’s presence in anti-aging products may, ironically, actually age you faster, by damaging your DNA.

Sodium benzoate has been linked to cancer, but is not known to be carcinogenic on its own.  There have been concerns by the FDA that when both vitamin C (ascorbic acid) and sodium benzoate are mixed, they form benzene, a known human carcinogen and DNA damager. This creates a serious concern, because sodium benzoate is commonly used in acidic foods with vitamin C, such as juices, sodas and salad dressings. The FDA says it’s safe because the amount used to preserve foods is very low, but don’t ever combine it with vitamin C, as this causes benzene to be formed.

Outside of our foods, benzene is the main ingredient in various paint stripper products, rubber cements, and spot removers, due it its highly destructive and solvent qualities. It was discontinued in rubber manufacture in the U.S. because it caused large percentages of workers to get leukemia. (Source)

Cancer is all about the cumulative effect. When the human body is exposed repeatedly to any level of this carcinogen, which is found in thousands of products, the immune system, over time, is depleted to the point that one acquires an immune deficiency. Then the body does not have enough essential nutrients to detoxify, and this occurs at the cellular level. Parkinson’s, neuro-degenerative diseases, and premature aging have all been attributed to this infamous preservative. – Natural News

When going through your pantry look closely at the labels for:

We found replacements for many of the products in our pantry/refrigerator that contained Sodium Benzoate. Read about them here.

~ “When you know better, you do better.” – Maya Angelou