My son is home with a stomach bug today, so this is what he is drinking. We used to give our kids Gatorade when they had issue with dehydration until we learned what it was really made of. Gatorade is made up of chemically treated refined sugar (as much as soda) and artificial colors, it is basically sugar water combined with artificial colors.  Purple Gatorade, for example, contains Red 40 and Blue 1.

Gatorade was developed in the early 1960s by researchers at the University of Florida. Since its invention, manufacturers have added popular flavors to it. The drink is said to to replace electrolytes lost through exercise and exertion during the course of working out and sporting events. However, there are health risks that may result from the drink.

Gatorade has a high sugar and sodium content. Compared to a soda, there is more sodium in Gatorade, and sodium can lead to high blood pressure. High blood pressure is not usually associated with those under 30 years old, but it can still affect young athletes and endanger older athletes.

Gatorade is associated with significant weight gain. According to a University of California report that was cited in a Sept. 2007 Washington Post article, those who drink Gatorade regularly without engaging in at least an hour of vigorous sports activity can gain weight from the drink. Students who drink 20 oz. of Gatorade every day for a year gained approximately 13 pounds.

Those who drink Gatorade regularly are subject to tooth decay and other dental problems. A 12 oz. bottle of Gatorade Rain contains 21 grams of sugar. In addition to causing cavities, other problems can result as well. According to a New York University College of Dentistry study, prolonged use of the sports drink will cause significant staining of the teeth. NYU used cow teeth in its study (they are quite similar to human teeth) and soaked them in Gatorade and water. Those soaked in sports drinks grew discolored because of the high acidic content, according to NYU professor Mark Wolff. (Source)

The alternative we use for Gatorade consists of the following (it is delicious!):

– 6 oranges, juiced (energy from natural fruit sugars)
– 1 cup coconut water (electrolytes — potassium and magnesium)
– 1/2 lemon, juiced (electrolytes)
– pinch of Himalayan Pink Salt (because a cell’s ability to absorb water is dependent on salt, it’s one of the most essential nutrients to good health. As such, it’s often beneficial to add a pinch of salt to your drinking water, but be sure to use good quality salt instead of refined table salt.) 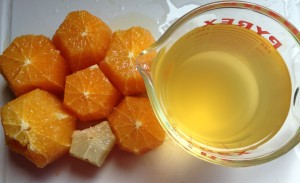 When you know better, you do better.